Lhasa, capital of the Tibet Autonomous Region, covers an area of 544 square kilometers and is "The Land of Gods" in Tibetan language, sits on the north bank of River Lhasa, a tributary of the Yarlung Tsangbo River, at an altitude of 3,600 meters. It has a history of over 13 centuries. Lhasa is aslo famed as "the City of Sunshine" due to annually over 3,000 hours of sunshine. It is the capital of Tibet , and the center of Tibet's political, economic, cultural, religious activities, and Tibet tours. Many historic sites and famous relics are in the city proper and its suburbs, such as Potala Palace, Jokhang Temple, and Ganden, Drepung, Sera Monasteries.

Potala Palace in the evening

This route is appropriate for people: 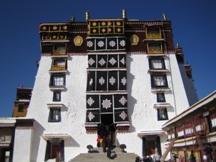 Day1 Fly to Lhasa from Chengdu

When your flight arrives in Tibet, you will be met by your local guide who will transfer you to Lhasa. On the way, you will enjoy the ‘heart-beating’ highland view along the Yarlong Tsangpo River (the longest river in Tibet). The rest of the day is free for you to relax and become more acclimatized to this altitude.

The first day of sightseeing starts from Lhasa's cardinal landmark- Potala Palace, a structure of massive portions. Its towering image is shown on all travel literature, but nothing can compare to your first sight of this incredible, amazing wonder of the world. It is absolutely awe-inspiring and you will be enchanted as you visit the rooms, halls and chapels of the palace.

In the afternoon, we will visit the Jokhang Temple which is the spiritual center of Tibet. Everyday, pilgrims from every corner of Tibet trek here from long distances to worship. The temple is the product of Han, Tibetan and Nepalese architectural techniques. Finally we will visit Barkhor Street which is the oldest street in this very traditional Tibetan city.

Day3 Tibet Museum and Family visit in the morning; Sera Monastey in the afternoon

Right after it, go to closely be with a Tibetan family for understanding in depth of local people's daily life where you can also by talking to the hostess. Kinds of candy and fruits are supplied to you.

Sera is one of Lhasa's two great Gelugpa monasteries, the other is Drepung. Around 5km north of central Lhasa, Sera may not be as grandiose as Drepung, but is more serene surrounded by many small temples. The 'Buddhism Scriptures Debating' in Sera is very famous.

Take a flight out of Tibet to any city where there is/are direct flight(s) to Lhasa.

The itinerary shown above is our unique arrangement for a 4-day tour, Interested in this tour? you can just pick it up Contact us for a quote.
Or choose to customize it as extensioned mentioned below

A. one more day to Yamdrok Lake

Yamdrok Lake: On the old road between Gyanste and Lhasa, dazzling Yamdrok lake can be seen from the summit of the Kamba-la (4794m). The lake lies several hundred metres below the road, and in clear weather is a fabulous shade of deep turquoise. Far in the distance is the huge massif of Mt. Nojin Kangtsang (7191m).

B. one more day to Namsto Lake

Namsto Lake: Going through Tibet Grassland for approximately 250km north-west of Lhasa, Namsto,  is the second-largest saltwater lake in China. It is over 70km long and reaches a width of 30km. The Nyenchen Tangula range, with peaks of more than 7000m, towers over the lake to the south. Namtso is a tidal lake and the ring marks of earlier lake levels are clearly visible by the shoreline. In clear weather the water is a miraculous shade of turquoise and there are magnificent views of the nearby mountains. The wide open spaces, dotted with tents of local nomads, are intoxicating.

C. one more day to Ganden Monastery or Tsurphu Monastery

Gandan Monastery: Ganden, just 40km north-east of Lhasa, was the first Gelugpa monastery. If you only have time for one monastery excursion outside Lhasa, Ganden would probably be the best choice. With its stupendous views of the surrounding Kyi-chu Valley and fascinating kora, Ganden is an experience unlike the other major Gelugpa monasteries in the Lhasa area.

Want to add one more day to scenery or one more different monastery?
Contact us for a private custom tour design for free