Drepung Monastery lies at the foot of the mountain, Gambo Utse, 5 km to the west of Lhasa and is one of Tibet's most important. Not only is it still Tibet's largest but at one time it was the world's largest monastery with between 7,000 and 10,000 monks, although today there are only a few hundred.

Founded in 1416 by Jamyang Choje, a disciple of Tsongkhapa founder of the Yellow Hat Sect of Tibetan Buddhism, the monastery, whose name means "Gathering Rice Monastery" in Tibetan, was the home of the early Dalai Lamas until the Fifth Dalai Lama built the Potala Palace in Lhasa. The monastery is also the final resting place of the second, third and fourth Dalai Lamas. 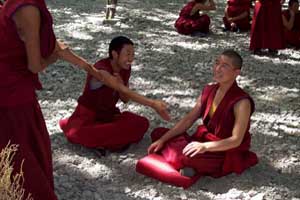 The monastery is not only a place of worship and meditation but is more important as one of Tibet's great University Monasteries. The first Dalai Lama studied here as did many of his successors. Many of Tibet's great leaders studied there and even today it remains influential.

The University Monastery originally consisted of seven 'tratsang' or colleges in much the same way as, say London or Oxford Universities are federations of otherwise autonomous colleges. The colleges were Gomang, Loseling, Deyang, Shagkor, Gyelwa or Tosamling, Dulwa, and Ngagpa. Later these were reorganised into just four colleges: Ngagpa, Loseling, Gomang and Deyang. Each college had its own abbot, syllabus, dormitories, kitchens, etc. 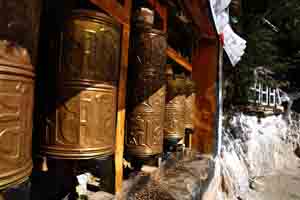 Drepung is also the site for the annual Shoton Festival. In summer, the monks are required to remain in their temples for weeks on end, partly to avoid stepping on any insects which are abundant at this time of year, and also to teach them the discipline of living together harmoniously. They should spend this time in meditation and contemplation. In August, they are finally allowed to leave the temples and hold a celebration. The Shoton Festival begins with the unfurling of a giant 'thangka' or scroll picture of the Buddha to the scent of incense and the sound of bugles. Traditionally the monks will be offered yoghurt by the laity as a form of giving alms and will be able to meet with their families.

When visiting the monastery, you should see the Assembly Hall with its statue of Dalai Lama XIII, lit pungent yak butter lamps. Scripture readings are often held here at midday. To the west is the kitchen, where you can sample Yak butter tea and can make donations. The most important statue in Drepung is a 15m tall statue of the 8-year old Maitreya Buddha. Here you will be expected accept some holy water which is poured into your right hand. You should take a sip, then splash the rest on your head.

The monastery also houses valuable Buddhist scriptures and Buddha statues along with a sacred mirror said to cure the facial diseases of those who gaze into it.

Tips: visiters can see the famous debating in the temple in the afternoon.