Jokhang Temple on Barkhor Square in Tibet's capital city, Lhasa is the most important Buddhist site in Tibet. The temple, whose name means 'Home of the Buddha', was built by King Songsten Gampo in the first millennium. He also built the first version of the nearby Potala Palace. Together they are the two most popular tourist sites in Tibet and they are listed together as a UN World Heritage site.

According to the ancient legends, in order to to promote friendly relationships with his neighbours the king married both Princess Bhrikuti of Nepal and Princess Wen Cheng of China's Tang Dynasty. Each wife presented him with a statue of Jowo Sakyamuni, one of the most important Buddhas in Tibetan Buddhist mythology. To house the Buddha brought by Princess Wen Cheng, the king built the Little Jokhang. Feeling jealous of this, Princess Burikuti asked Gampo to build a Jokhang for her too. So, in 647 AD the giant complex was built. 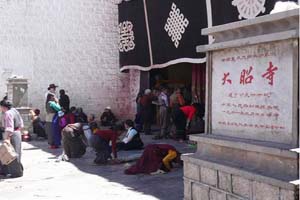 Sakyamuni was famously against the idea of 'personal worship' and did not normally allow likenesses of himself. Only three statues, which he designed himself, made during his lifetime. The first is a likeness of him at age eight; the second shows him at twelve when he was still a prince of India; and the third is of him as an adult. The statue kept in the Jokhang Temple is the statue of Sakyamuni at age eight. It was first presented to Emperor Taizong of the Tang Dynasty and brought to Tibet by his daughter Princess Wen Cheng.

Covering an area of approximately 25,000 square metres, the four storey wooden temple complex with its golden roof is a maze of small dark shrines dedicated to various gods and bodhisattvas. Over the many years of the temple's life it has been renovated and extended, but much of the original wooden construction remains. Carbon dating has shown wooden beams to be from around the seventh century. The architecture shows influences from India, Nepal and Tang Dynasty China.

Surrounding the temple complex are three circumambulation circuits. Every day, for over a thousand years and up to the present day, devout Tibetan Buddhists have been walking around these routes known as 'kora' in Tibetan, spinning prayer wheels and chanting. The most devout will prostrate themselves every few feet. Finally, after completing the circumambulations, the pilgrims enter the temple itself and follow the route marked with votive candles leading to the 1,300 year old Central Hall where the statue of Jowo Sakyamuni, Tibet's most holy relic, resides. This is a pilgrimage every Tibetan Buddhist aspires to make. 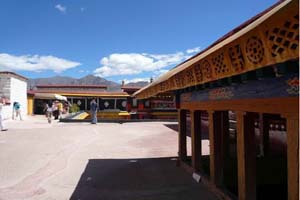 The temple is also home to around 800 Buddhist metal statues of great value and importance, including some extremely rare and important brass and copper statues originating from Kashmir, India, Nepal, and China. Along with a huge collection of thousands of painted scrolls known as 'thangkas', most of these treasures are hidden away in areas of the temple not open to the general public.

In front of the temple is a walled enclosure which contains the stumps of two willow trees. These are said to have been planted by the Princess Wen Cheng to mark the consecration of the temple in 647 AD

The temple is only open to tourists in the afternoons – mornings are reserved for Tibetan pilgrims- but a visit to the temple is certainly an essential part of any visit to Tibet.