Whatever you call it - Mount Everest in English, Qomolangma in Tibetan , Sagarmatha in Nepalese, or Zhumulangma in Chinese, it is still the highest mountain in the world proudly standing at a height of 8,848 metres or 29,029 ft.

The mountain straddles the border between Tibet and its southern neighbour, Nepal and has been for many years a symbol of human endeavour. English explorer, Mallory, who lost his life just yards from the summit in an early attempt of the summit in 1924, was asked “Why do you want to climb Mount Everest?" His famous answer: "Because it's there." 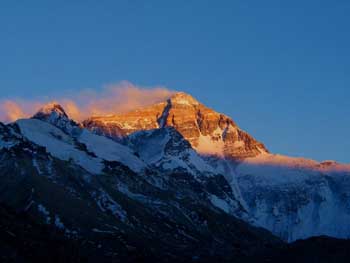 The mountain was finally conquered when, at 11:30 a.m. local time on 29 May 1953, when New Zealander Edmund Hillary and Tenzing Norgay, a Sherpa Nepal stepped on to the summit. News reached London on the morning of the new Queen’s coronation adding significance to the news. Hillary and team leader John Hunt were immediately knighted while Tenzing Norgay, not being a subject of the Queen but the King of Nepal, and therefore unknightable, was awarded the George Medal.

Since then numerous successful ascents have been made – both from the southern route from Nepal and the northern route from Tibet. The youngest to climb the mountain so far was 13 years old; the oldest 76 years old. A Frenchman landed on the summit by helicopter, but I think that it is cheating! Nepalese Sherpa, Apa Sherpa has reached the summit 20 times. 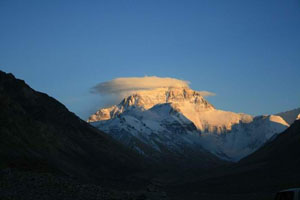 But it must be remembered that the mountain has also claimed over 200 lives, including eight who died in one day in 1996. Many of the bodies of the dead remain visible on the mountainside as rescue and removal is too dangerous.

The average visitor to Tibet may dream of climbing the mountain, but in dreams is where it will remain. The preparation and danger is not something to be undertaken lightly. But we all want to see the thing, don’t we? And fortunately we can. We can easily arrange transport to take you to the famous Base Camp.

In fact there are two base camps: one on the southern side in Nepal and one on the northern side in Tibet. This is where serious climbers go first, to acclimatise to the altitude and lack of oxygen and to make final preparations for their ascent. Access is only really possible in the summer months.

Depending on whether there is an ascent in preparation or not, the Base Camp may be empty or not. It is a camp site. No hotels or restaurants or swinging hotspots! But it has one magical property which is the real reason for visiting.

The real reason is a perfect view of the king of mountains in all its marvellous snow-capped glory. Take your camera! Take two! And look up and feel small and marvel at how beautiful and astonishing a world we are lucky to live in.