Just to the north of Tibet's capital city, Lhasa, at the base of Pubuchok Mountain sits the 28 acres of Sera Monastery, one of Tibet's three most important university monasteries. There is some debate as to the meaning of its name. One legend is that there was a violent hailstorm when the monastery was being built and 'sera' can mean 'hail' in Tibetan, so it became Hail Monestary. A competing legend has it that 'sera' means 'rose' and as the monastery was surrounded by rose bushes, it was called 'Rose Monastery'. 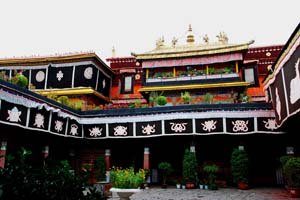 Built in 1419, the monastery consists of three 'Zhacangs' or colleges. Besides the college buildings are the 'Tsokchen Hall' or Great Assembly Hall and the 'Kamcun' or dormitory along with other buildings of lesser importance.

The Great Assembly Hall, a four-storey structure to the north east of the monastery, facing east, is where several religious rituals and rites are conducted. The 2,000 square metre hall with its125 pillars contains five chapels which house statues or images of the Buddhas. Also kept here are the ancient and delicately written scriptures 'the Gangyur of Tripitaka' in 105 volumes written in Tibetan and the most treasured possession of the monastery. The scriptures are printed on wood blocks with gold covers engraved in red lacquer. It is said that Chengzhu, Emperor of the Ming Dynasty presented these scriptures to the monastery.

The three colleges, Me Zhacang, Je Zhacang and Ngaba Zhacang are where the monks study the Buddhist classics. The oldest, Me Zhacang dates from 1419 and features a well-preserved fresco. In the Je Zhacang, the Hayagriva displayed is extremely famous throughout Tibet.

Kamcuns are the dormitories where the monks usually eat and sleep. The Sera Monastery has thirty-three Kamcuns which have a central court-yard. Besides sleeping accommodation, they also have halls where monks can read the doctrines, houses and tea houses.

Sera monastery is well-known for its almost daily 'monk debates' which are popular with visitors. In the afternoon, the monks gather in a central courtyard and debate points of Buddhist learning. Competitors accompany their point scoring with elaborate symbolic gestures and the debates become heated and lively. You don't need to understand Tibetan or the finer points of Buddhist theology to enjoy the spectacle. 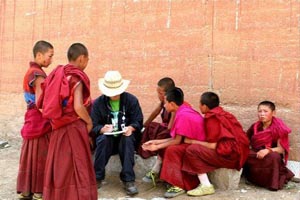 During the Shoton Festival which takes place around August the Buddha-Unfolding Festival is held. This is a fantastic occasion to worship the Buddha which is open to both locals and tourists.

Besides observing the normal Buddhist festivals, Sera Monastery has one unique festival called 'Blessing of the Dagger of Exorcism'. This comes from a legend that in the 15th century, the flying Dagger of Exorcism was brought to Tibet from India and was enshrined in the Drepung Buddhist Guardian Hall of Sera Monastery. The dagger was later carried to the Potala Palace and blessed by the Dalai Lama. On its return to Sera a general blessing was given to the monks and lay communities. Every year, on the anniversary of that day, thousands of pilgrims take part in the blessing festival.