At 3800 metres altitude, on a hill to the west of Tibet's second largest city, Shigatse, 280 kilometres west of Lhasa, sits the Tashilhunpo Monastery. Founded in 1447 by the first Dalai Lama, Tashilhunpo is the traditional seat of the Panchen Lama, the second most important Lama in Tibetan Buddhism and spiritual tutor to the Dalai Lama. In its prime the monastery had over 4,700 monks. Today there are around 800. 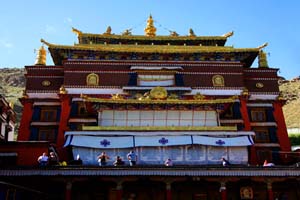 The monastery consists of several buildings.

Jambu Chyenmu or the The Maitreya Temple lies on the on the western side and is the tallest building in the monastery. It was built in 1914 by the Ninth Panchen Lama to house a huge statue of the Maitreya Buddha. The statue sits on a lotus throne with its hands in the symbolic teaching pose. Just one finger of the giant figure is almost 4 feet long. The statue contains 279 kg of gold and 150,000 kg of copper and brass which was moulded on a solid wooden frame by Tibetan and Nepalese craftsmen.

On the eastern side is the Gudong or the palatial living quarters of the Panchen Lama. It is also the final resting place of the fourth Panchen Lama whose tomb sits in a temple within the palace. The tomb is especially lavish with over 85 kg of gold and countless semi-precious stones. On the left are three statues representing Amitabha, the Buddha of Infinite Light, whom the Panchen Lamas are thought to reflect.

There are also various chanting halls where the faithful monks would repeat the scriptures over and over again and the monastery holds an important, priceless set of ancient Buddhist scripts.

Like all Tibetan monasteries, Tashilhunpo is also an educational establishment and it is home to Ngang College – a Buddhist study centre. Here and at other venues in the monastery, visitors can see the famous debating competitions which monks undergo in their search for enlightenment. 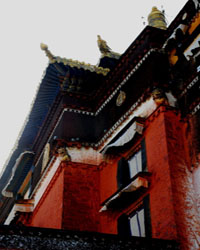 The Great Courtyard and Great Gallery contain and display some of Tibet's greatest Buddhist art and statuary.

But perhaps the most important place in Tashilhunpo Monastery is not in the building but on the roof. Here, among a number of chapels, lies the tomb of the First Dalai Lama, one of few not to be entombed in Lhasa. This is one of Tibet's most sacred sites.

The roof is also home to what has been called Tibet's Chamber of Horrors. One small chapel contains images of demons appropriated from pre-Buddhist religions such as the animist Bön faith.

Late June is a good time to visit Tashilhunpo Monastery as this is when they hold one of their most important festivals.