Travelling along the Friendship Highway, which connects Tibet's capital, Lhasa with Kathmandu in Nepal, 100km southwest of Lhasa you reach the summit of Kamba-la pass which is 4974 metres above sea level. Stopping here you look down over the stunningly beautiful Yamdrok Lake lying a few hundred feet below. 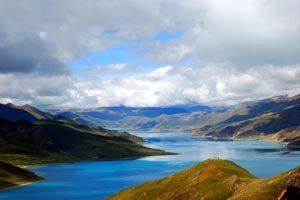 Surrounded by snow-capped mountains and fed by numerous small Himalayan streams, the crystal clear waters of the lake are like a mirror under the clear blue sky.

For Tibetans, lake Yamdrok is the largest and most important of the three holy lakes. It is believed that Yamdrok Lake is the female Guardian of Buddhism in Tibet and that the lake will bless and protect them. Every year, pilgrims make there way here from all over Tibet and beyond, mostly on foot prostrating themselves at full length every three steps. It is also said that should the lake every dry up, then Tibet will no longer be habitable. The local people will tell you that the waters can make the old young again and can improve children's intelligence.

Covering an area of 621 km² and up to 60 metres deep, the fan shaped lake is 130 kilometres long and 70 kilometres wide. The coastline is highly crenellated, with numerous bays and inlets and the lake has many small islands.

Yamdrok Lake was home to the famous Samding monastery, unusual in Tibet as it was the only monastery to have a female abbot. The abbess became famous when she turned herself and her nuns into sows to prevent a Mongol raid on the nunnery in 1716. The monastery was the residence of the Dorje Pakmo, the highest female Lama and third most important holy figure in Tibetan Buddhism. Today, the monastery is inactive, but is currently being restored.

The lake also has some alternative names such as Coral Lake which comes from its jagged coastline which gives it the appearance of a piece of coral. Another is Green Jade Lake implying that the pure clean water of the lake is as smooth as the surface of fine jade. As the sun is reflected from the waters at different depths, its colours change giving it a beautiful, mysterious appearance – like the finest jade. 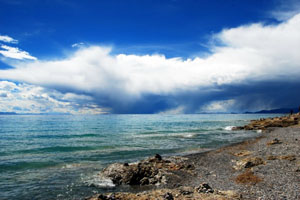 Apart from its natural beauty, the lake is an important resource in Tibet. It provides over 200 million kilograms of fresh fish every year, which is sold in Lhasa and even beyond Tibet. The islands are used as pasture land by the local herdsmen who herd their yaks over in leather boats in spring and back again before winter sets in. The lake also provides power. Tibet's largest power station lies at the lake's western end.

Yandrok Lake is also Tibet's most important natural habitat for many species of water bird and every winter flocks of birds fly here from the south. Along the banks and on the islands can be found large numbers of swans, ducks, cormorants and barhead geese.

In the depths of winter, the lake freezes over, but remains astonishingly beautiful.