It is estimated that there are 5.4 million ethnic Tibetans. Many still live the same nomadic lifestyle their ancestors have done for centuries. High above the rest of the world, they tend their yaks and eke out an existence from the uncooperative earth. 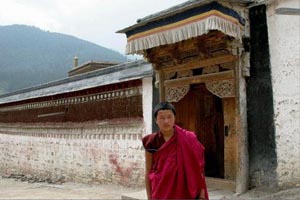 Few plants grow well at this altitude and so the Tibetan people have developed a cuisine like no other. The most important crop is barley. Barley flour is made into a kind of dough called 'tsampa' and is the staple food of Tibet. It is made into noodles or delicious steamed dumplings called 'momos'. They eat mainly yak, goat, or mutton, often dried, or cooked into with potatoes. Yak yoghurt, butter and cheese are also an important part of the Tibetan diet. Yak butter tea is the most common drink – a bit of an acquired taste for many visitors.

Because of the often harsh conditions here on 'the Roof of the World' both men and women wear long thick dresses known as 'chuba'. Traditionally, men wear their hair long unless they are Lamas or monks in which case they shave their heads. Women plait their hair – two plaits for the married women, one for unmarried girls. 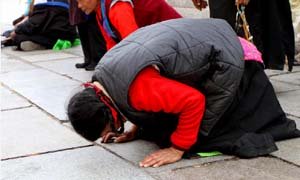 As with other places, Tibet has its own creation myth and they traditionally believe that they are descendents from the marriage of the monkey Pha Trelgen Changchup Sempa and rock ogress Ma Drag Sinmo.

Scientists have long been fascinated by the Tibetans adaptation to living at such a high altitude, but no conclusive explanation has been reached. Certainly they are a hardy people and they have the benefit of one of the world's oldest medicine cultures. Traditional Tibetan medicine diagnosis takes a holistic approach and considers diet, lifestyle along with other symptoms and treatment is largely herbal, using around two thousand different plants, but also animal products and minerals.

Most famously, the Tibetan people are known for their religion. Buddhism was introduced in the 7th century AD, but combined with elements of the aboriginal "Bon" religion to become a unique version of Buddhism, known as Lamaism. 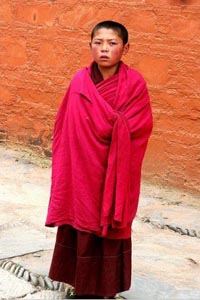 The Tibetan people are mostly highly devout Buddhists and Buddhism is at the core of their entire culture. Festival and holidays, art, architecture, music etc all reflect the people's Buddhist beliefs.

Throughout Tibet are important temples and monasteries to which many Tibetans make pilgrimages, even walking hundreds, if not thousands, of miles, prostrating themselves on the ground every three paces, chanting the famous mantra "Om Mani Padme Hum" till they reach the object of their pilgrimage.

Pilgrims walk clockwise round the monasteries several times before entering – a spectacle best seen in Lhasa's Jokhang Temple. Elsewhere you will see people with their prayer wheels which contain texts of the mantras. It is believed that spinning the wheels gains the same merit as reciting the mantras aloud.

Virtually all of the Tibetan people's traditional festivals relate to their Buddhist beliefs and are celebrated enthusiastically by young and old. Everything from Buddha's birthday to the Harvest Festival is celebrated with feasting, music and dancing, but always with reverence.