If you plan to go to Lhasa Tibet from Chengdu, or come back from Lhasa to Chengdu, please now be notified that the through tickets, no matter what type of tickets, cannot bought due to the train time-table adjustment, though you have to stop over in Xining by the regulations for 20 minutes layover for the switching from one train to another.

But you can plan this way if you insist on doing so. You can take a train or flight from Chengdu to Xining, then you take another train which is Tibet train. The Tibet train from Xining to Lhasa or vise versa, runs as normal.

We are not sure if it is a rumour but to be responsible for our customers we'd like to speak it out. The possible-but-not-officially-confirmed saying that the road to Everest was blocked by Tingri Local government. But till now there isn't any official announcement from Tibet Tourism Bureau saying about it. However, in oder not to influence your Tibet tour, we recommend you do not choose any tours relating to Everest, just in case you cannot achieve your expectation.

A new circle road has been built in Lhasa to accelerate the speed to sightseeing!

A new road has been built in Lhasa for the fast approaching to the destination of tour, restaurant, hotel, etc. The road is circling around Lhasa, named as the third ring road.

Thus, to understand the local people Tibetans daily life, such as their habits of daily life, what they do every day, etc. then there is no need to squeeze in and around Jokhang Temple. And on the contrary, people living a little far away from it can see more of what they want to see in the village-in-the-city.

2. Thus, tourists can go to Lhasa Tibet either by the train but changing in Xining or by a train stop in Xining, and take another train there after a few hours stretching out in Xining and have a short view there.

3. Nowadays, trains from Beijing, Chengdu, and Shanghai, is more difficult to get the tickets, especially the trains from Beijing is the most difficult to get the tickets. And I think people taking the train to Tibet  mainly want to enjoy Tibet Train more than those inland China.
If that is true, then you have much more choices then ever before. You can take trains from Lhasa to Xining, as all trains must stop in Xinng. Then you can take flights to your destination such as Beijing, Shanghai, etc. or China Express trains to there which cost 30% of the time if taking normal trains
Vice versa, you can take  flights, or China Express trains from Beijing, Shanghai, Xian, Chengdu, etc. to go to Xining, then take Tibet trains to Lhasa Tibet.
This is a trick. And this will be accomplished after July 1st.

4. As everybody knows now, after One Belt On Road help in Kazakhstan about Silk Road, the Buddhism Culture Center Dunhuang where the world famous Moga Grottoes Cave is, came in to sight more than before. Hence, a tour linking Dunhuang to Tibet is possible. The possibility is becoming reality by the end next year which is the end of 2018 and early of 2019.

Let me show you the details by drawings as shown below. 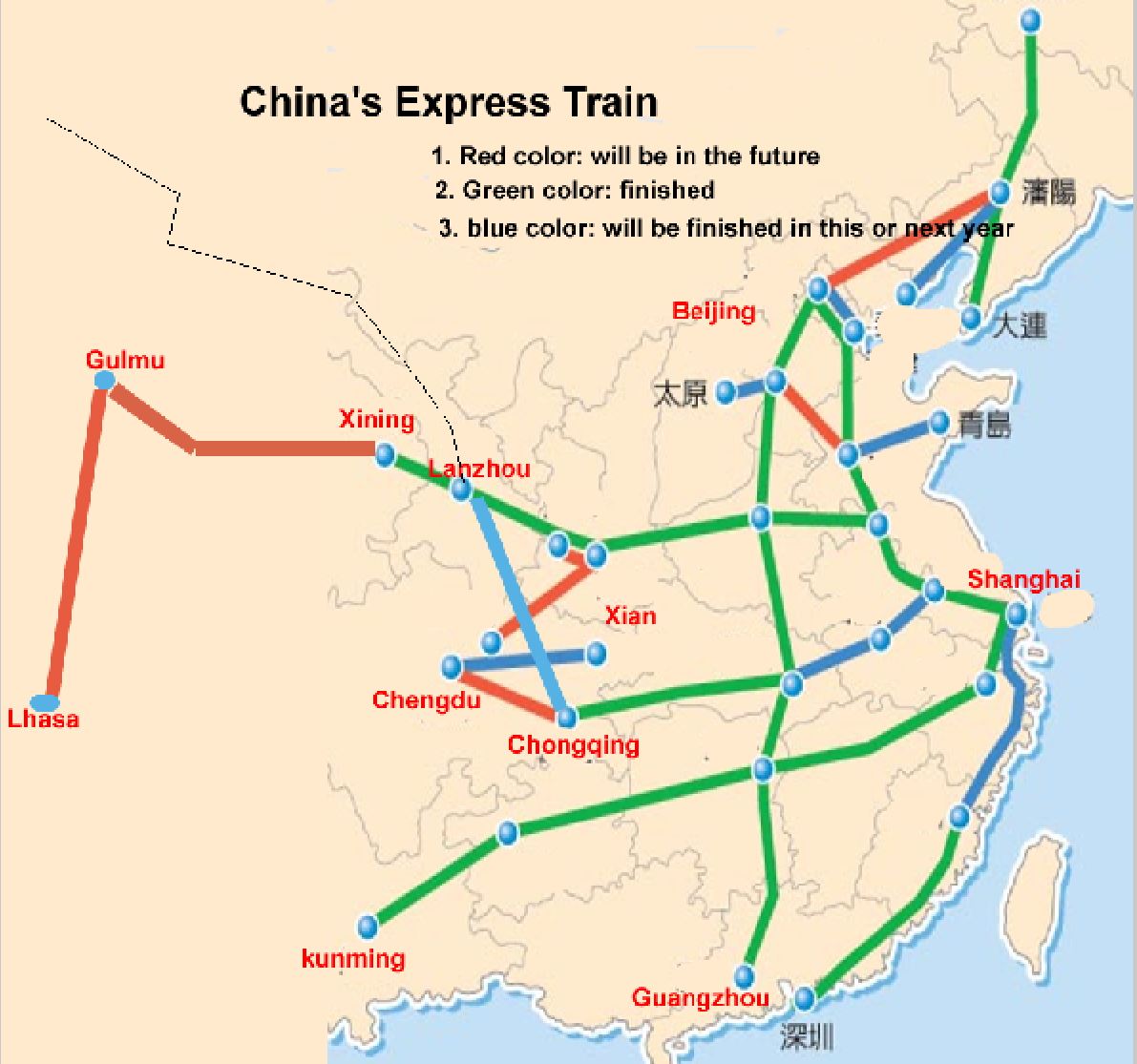 Direst Flight from European Countries, knowing it can help you save flying time, energy, and money of course

News about old news but they are very useful to tourists

Besides the above, there are flights to Paris, Franfurt, and Moscow. 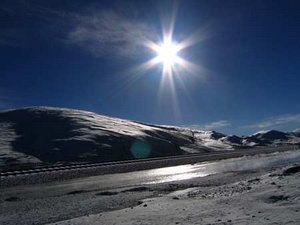 Shanghai strives for straight train to Lhasa
(2006-3-14)Shanghai Railway Bureau is striving for launching passenger train to Lhasa July 1 when Qinghai-Tibet Railway will launch its trial operation, sources from related department.Preparations including ticket price, schedule, and trainman selection are under tense proceeding. The straight Shanghai-Lhasa trip will cost about 52 hours by train.

24 Chinese mountaineers conquer Mt. Everest
Beijing, May 23 (PTI): A record 24 Chinese mountaineers and scientists on Sunday conquered Mt Everest, kicking off a state-of-the-art effort to re-measure the world's highest peak and the most comprehensive scientific studies on the effect of global warming in the Himalayan region. The expedition, which spent 77-minutes at the peak, scaled the earth's highest peak and successfully performed measuring operations, the expedition headquarters announced.

BEIJING (Reuters) - China will complete a controversial railway link across the snow-covered Qinghai-Tibet Plateau to Lhasa by the end of the year, Xinhua news agency said on Wednesday.

China to make Tibet a tourist draw (Mar 10, 2005 )
China has launched a 15-year plan to turn Tibet into one of the world's leading tourist destinations. The Tibet Tourism Development Plan would vigorously promote the Chinese autonomous region, known as "the roof of the world" for its mountainous terrain, to boost its economy and start the region's "urbanisation", according to the Xinhua news agency. 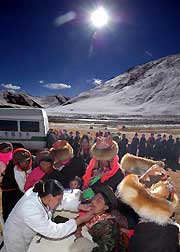 (China Daily, Jan 19, 2005)During her first six years of working as the only obstetrician in the Pozhang Township Hospital in the Tibet Autonomous Region, Mima only delivered 20 babies among a childbearing population numbering 1,700. But in 2004 alone, says Mima, who began working in 1997 after four years at Nanjing Medical School, "I've delivered eight births, all safe."

Volunteers fulfilling their dreams in Tibet

LHASA, Jan. 18 (Xinhuanet) -- Candles, shoulder poles and mice are engraved in the memories of three college volunteers who came to teach in a junior middle school in southwest China's Tibet Autonomous Region more than one year ago.

Tibet should stay with China: Dalai Lama
Bangalore, December 3, 2004 The Dalai Lama today said it was in the interest of Tibet to remain in China especially from the perspective of economic development. He reiterated that he was only seeking "genuine autonomy for his country and not independence".

Tibetan Buddhism festival
China Tibet Information Center, Nov. 5, 2004 The day on November 4th, (September 22nd in Tibetan calendar) is the Tibetan Buddhism festival named "Dissension Festival". On that day, the disciples went to small and large monasteries, such as Jokhang Monastery, Potala Palace to burn incense. They swayed Prayer wheels and did kowtows while praying for next year's crop harvest.

Foreign tourists enjoy unrestricted sightseeing in Tibet
(xinhua news, October 31, 2004) Overseas tourists have enjoyed unrestricted sightseeing in all the 70 counties of southwest China's Tibet Autonomous Region. Altogether 1.34 million overseas sightseers have visited Tibet from 1980 to 2003, with 51,000 in last year alone, according to the official statistics. "We welcome more foreigners to travel in China and Tibet, and no special forbidden zone would be imposed for them," said Wang, an official of the local tourism bureau. Overseas tourists must have Tibet travel permits issued by Chinese governments before they enter Tibet, according to the regulation made by Chinese central government in 1989.

Tibet reports marked progress in infrastructure construction
(Xinhua) 2004-10-24
Tibet invested heavily this year in building 52 of the 117 major infrastructure projects set by the Chinese government in June 2001; 16 had been completed by the end of September, according to the statistics from the regional development and reform committee.

Construction of Qinghai-Tibet Rail
People Daily Online, Oct. 14, 2004 - Workers lay railroad tracks near the Tongtianhe River at a construction site of the Qinghai-Tibet Railway on Aug. 13, 2004. The railway, linking Xining, capital of northwest China's Qinghai Province, and Lhasa, capital of southwest China's Tibet Autonomous Region, has the highest altitude in the world. 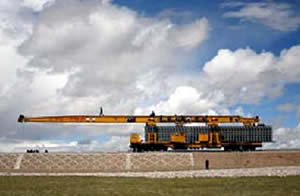